Start typing and press
Enter to search
Skip to content

Living so far from my home town means that I really look forward to family gatherings. They don’t come round often enough, but when they do they’re pretty special. Last weekend’s to celebrate my cousin’s wedding in Devon was one of the best. Not only was the setting of Tunnels Beaches in Devon simply breathtaking, the gathering of so many generations of family meant that ‘Super Nan’ rubbed shoulders with her great grandchildren including of course the YogaTwins.

The weekend didn’t exactly go without a hitch. One of the boys was sick on the journey down. We thought it may have been because of how poor Bridgewater services are, but we actually think it was a reaction to some dodgy Nurofen. With a poorly boy having carpet bombed the car park with vomit we seriously considered returning home, but we’re so glad we didn’t.

In their true indestructible style they were both soon eating rolls and chocolate biscuits like they were going out of fashion. After a journey that seemed to go on forever, arriving at such an incredible setting made it all worthwhile.

The luxury accommodation was situated at the entrance to the tunnels which were unbelievably hand carved in the 1820s to provide access to the otherwise inaccessible beaches & rock pools.

We took the boys straight down to the beaches and were blown away by the craggy rock faces, rolling waves and relics from a bygone era when the beach used to be exclusively for ladies. The gentleman’s beach being a short distance in the opposite direction.

You may be starting to question what this has got to do with yoga?

Well, I was honoured to have been invited to teach yoga to the Bride and her bridesmaids on the day of the wedding. I had hoped to run the class on the ladies beach but unfortunately it was high tide, and by high tide, I mean waves crashing against the exit from the tunnels!

So, the class took place in the accommodation courtyard. As you will see from the photos it was not a bad setting to teach outdoor yoga. 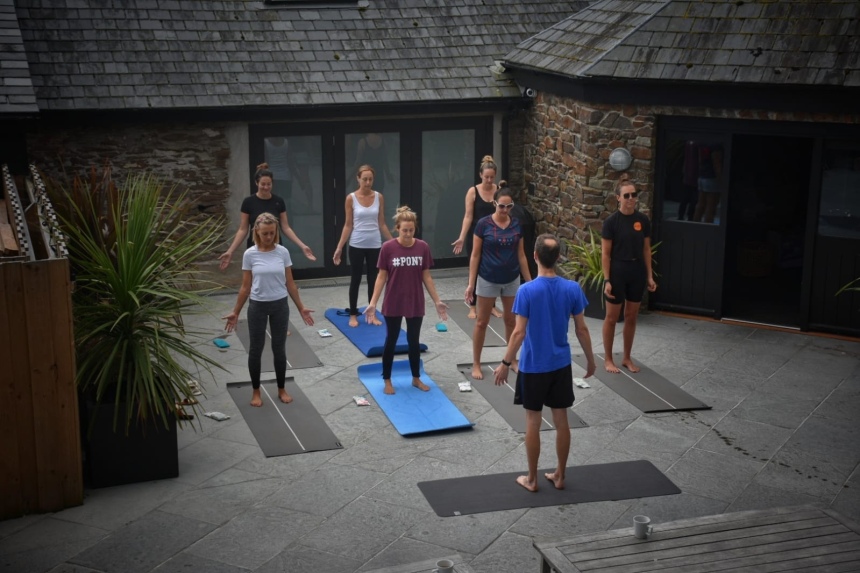 Thankfully we had the weather on our side so we were very much reaching for the blue skies poking between the fluffy white clouds. It’s fair to say that some of the group were a little worse for wear. So I went very easy on the inversions.

We focused on a sequence that had foundation yoga poses at its heart. An early meditation to draw attention inwards from all the preparations going on around us. We used calming breathing techniques to become present in the moment and not think too far ahead. We practiced a short movement based sequence to awaken our body’s from their early morning slumber and unlock energy needed for the day ahead. 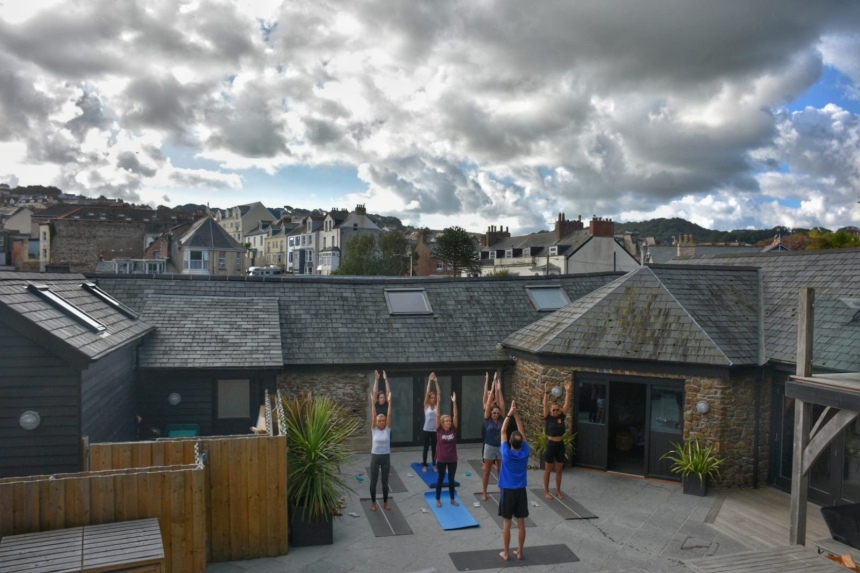 Drawing the class to a close, I invited the bride to consider the day ahead and life beyond that – how married life doesn’t come without challenges along with the good times. Reflecting upon what we had learnt and how she could apply simple techniques to make for a happier and healthier life together.

I was truly honoured to be part of such a special day. One of the bridesmaids thanked me later in the day. Not just for the class, but how it helped her hangover recovery. Testament to this being that she had only been sick once more since the class which I took as a compliment!